Eric Kandel is a prominent Nobel Prize winning neuroscientist who has written a book about brain science and modern art. He suggests you purchase a copy of this fine extract for strategic placement on your coffee table where guests might notice it. Don't you want your guests to be aware that you read books by Nobel Prize winners?

I can hear you say: "But what if my unwashed guests don't know that Eric Kandel has won a Nobel Prize?". Worry not, Eric has foreseen this eventuality (he has a Nobel Prize after all!) and was careful to place a thoughtful reminder right at the top of the cover just below his name: "Winner of the Nobel Prize". In this way guests can avoid any confusion or, heaven forfend, embarrassment.

Right below Eric's considerate gesture is a picture of a canvas with a pinkish background and three broad rectangular patches of red, black and orange paint from top to bottom. It's a symbol that will cue your more distinguished guests to respond with a passphrase cleverly veiled as a question: "Is that a Rothko?" (as if either of you didn't already know!). Of course it's a Rothko! The market for 40 million dollar canvases with three patches of color on them isn't that big. You and your guest can now be secure in your respective memberships in the select group that ponders the high minded matters of brain science and modern art. You can proceed to exchange inspirational anecdotes from your favorite TED talks in complete safety.

Brain science, especially neuroscience, has become a propaganda tool used to sell a myriad of dubious products and this book is one of them. How ironic that a book that professes to be about brain science is nothing more than an insult to the reader's critical thinking.

The cover is an epitome of marketing: it wants to sell you a brush with glory. The trick is that it's the kind of glory you can't have. You can't have a Nobel Prize. You can paint something that looks quite like a genuine Rothko but can't sell it for forty million dollars at a fancy auction house. Inaccessibility foments demand. Marketing professionals have long understood this principle and most of them probably don't know their amygdala from their hippocampus.

Eric's book claims to have something to do with building a bridge between the two disparate cultures of science and art, which is funny, because the book feels like it was written in two entirely separate sections. The first section is essentially a thirty page booklet that provides an excellent overview of current brain science benefitting anyone who wants to understand brain structure and function in broad strokes. The second part reads like an auction house catalog with breathless statements about famous artists and their works, juxtaposed with vacuous and entirely superficial scientific analogies. If these analogies are supposed to be the struts of the bridge we were promised then it doesn't seem that the bridge would be very sturdy. Let's examine some of the analogies carefully.

Consider where Eric compares the use of the sea snail Aplysia as a tractable organism for neuroscience (the insight for which he received Nobel Prize), to a work by Matisse.

Matisse (well, his assistant) cut out some colored paper and arranged the pieces in a way that looks like a tree on top of a blue box with a "Happy Birthday!" banner hanging behind it. It only reminds you of a snail once you've been told it is supposed to be a snail. Eric seems to be attempting to link the reductionist approach of using Aplysia for brain science and the reductionist representation in this painting. Other reviews suggest that this is a tongue-in-cheek joke; if that is true then perhaps that inference extends to the entire book.

The neural basis of the visual detection of things like lines is a seminal one in neuroscience.

In 1959, brain scientists discovered an important biological basis for Mondrian's reductionist language. David Hubel and Torseten Wiesel, working first at Johns Hopkins University and then at Harvard, discovered that each nerve cell in the primary visual cortex of the brain responds to simple lines and edges with specific orientation whether vertical, horizontal or oblique. 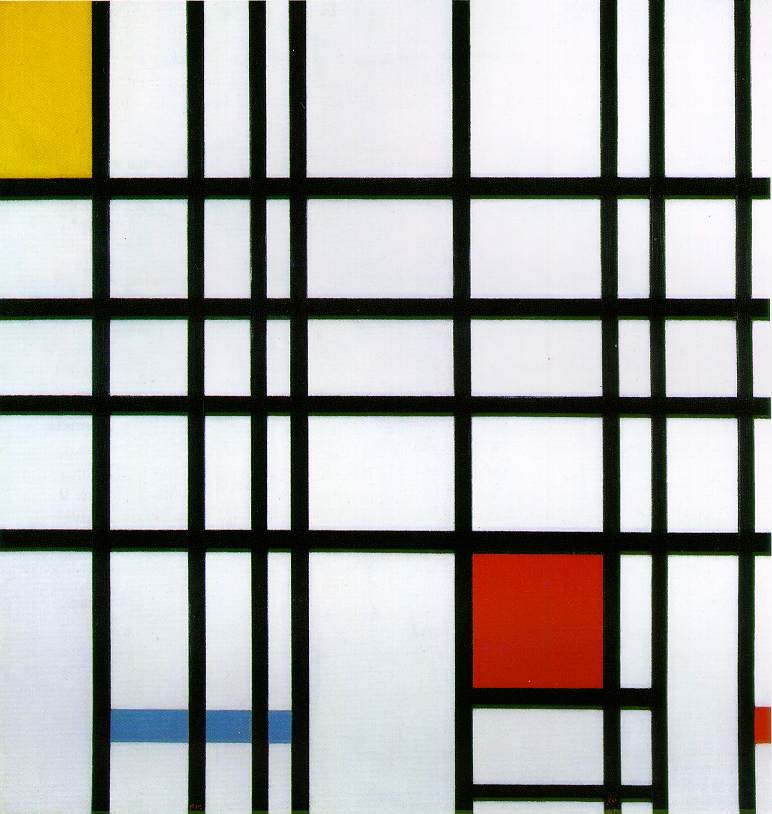 The passage suggests Hubel and Wiesel (also Nobel Prize winners) were somehow inspired by Mondrian's paintings. They were not. Their works have as much to do with each other they have to do with tic-tac-toe or window screens...because, you know...lines.

On William de Kooning's Woman I Kandel suggests that the painting that captures the divergent dimensions that include motherhood, aggressive sexual power and that:

Woman I is considered to this day to be one of the most anxiety-producing and disturbing images of a woman in the history of art.

Who is claiming that this painting makes anxious and how was anxiety measured? Eric doesn't tell us what that person felt when they saw the "rather crude" paleolithic Venus of Hohle Fels (right). At this point Eric goes off to talk about the neuroscience of emotions of mating and aggression since those emotions are "captured" by Woman I, but I don't seem to feel any emotions at all when I look at the painting.

Oh. Wait. I think there is this feeling welling up inside of me...I'm not sure how to explain it. That thing on her right shoulder resembles a parrot. Ah! I feel it now. She must be a retired pirate fondly reflecting on the sea faring days of her blissful youth. I am overwhelmed with a sense of happiness for her. Is that how you feel?

My favorite bizarre statement in the book might be about two paintings by J.M.W. Turner (who was very skilled) and relativity.

Turner was one of the first artists to free painting from the "dreary chore of mimesis" and he did so substantially before the theory of relativity was published.

The painting on the left was done in 1805 and the more abstract one on the right was done in 1842. Einstein published the idea of special relativity in 1905. I suppose there really are only two explanations for the way he painted the more abstract canvas, he either A) foresaw what it would look like to ride a boat that travelled at nearly the speed of light or B) wanted to loosen up his strokes and enjoyed the way the tilted horizon suggests being on stormy water. I suppose it will forever remain one of art history's greatest questions as to which explanation is correct.

The book is filled with many more passages like these. Apologists will defend them as Eric's valid subjective experience, but if all we are talking about is pure subjectivity we'll never build that bridge to objective science mentioned on the cover. This sort of breathless language about art isn't the only problem with the book though, there are some fundamental errors.

The book naturally delves into considerable depth around color vision, but the presentation is misleading. If you really want to understand vision science, one of the most comprehensive and correct sources is handprint.

Eric examines the painting on the book cover:

The environment surrounding an object plays a critical role in determining its color. We see this in Rothko's #36 Black Stripe of 1958 (fig. 9.5), where the light reflected off the black stripe affects our perceptions of the reddish colors that surround it.

This is a trivial observation of color contrast that is true for every painting we look at, indeed it is true for our constant experience of color vision. Why do we need Rothko to tell us something when a simple diagram will do? 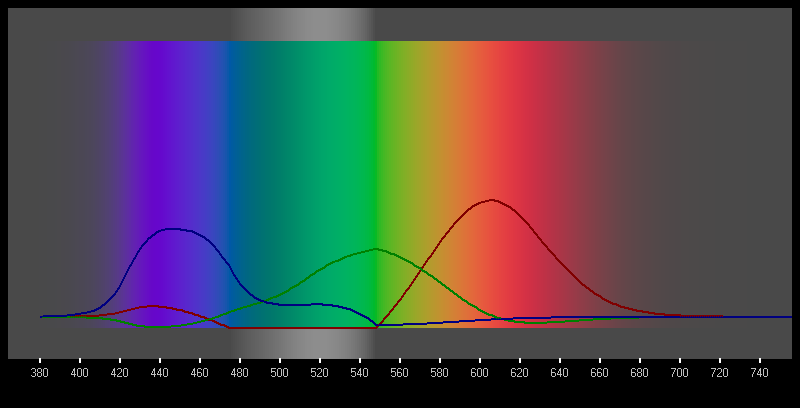 Understanding color vision requires at least an approximate rendering of the color spectrum (top, from here), but the spectrum shown on page 179 in the book is wrong (bottom). The yellow is way too bright and close to 600 nm and there is no cyan at around 495 nm. The green region between 500 nm and 550 nm is mysteriously dark. Red stays at constant luminance till about 680 nm. You would think it would be important for a book like this to accurately render the color spectrum.

Eric also tries to connect with the youth of today by mentioning a hip meme du jour: #thedress. A page and a half is spent providing a completely incoherent explanation in a tone of complete confidence. The explanation invokes familiar concepts from vision science including subjective experience, a priori beliefs, illumination inferences, contrast, etc. What Eric doesn't tell you is that we have no real idea or consensus as to how #thedress works. The image is a remarkable discovery whose effect has not been replicated with synthetic stimuli. We should be able to make twenty such dress-like images if this effect was truly understood.

Reductionism In Art and Brain Science is a silly book and you should not buy it. It's been crafted to tug on our desire for unattainable things like being an intellectual celebrity and having people fawn over your unskilled work that sells for millions. The book will ultimately dull your understanding of how to make art and how to understand the brain.

There are many interesting topics about brain science and modern art the book doesn't even mention, yet it somehow managed to work in a reference to relativity. Conveying the importance of careful experimental design such as dealing with confounding factors is necessary for understanding what our brain does with art. Eric doesn't even glance at the role of social conditioning, perceived authority and perceived price in our stated aesthetic preferences. At least some readers who offered positive reviews must be quietly ignoring their inability to feel the prescribed emotional response to the highlighted paintings. Eric doesn't even touch on the primacy of celebrity and the dubious places, people and practices amongst which such works are bought and sold. Don Thompson does a better job on following the money trail in his book. I personally think that the modern art world is worthy of immense suspicion, not blind celebration.

This isn't to suggest that all modern art is either unrecognizable, unskilled or unenjoyable. The rub lies in the shameless attempt to bolster the validity of modern art by merely juxtaposing it with scientific words. There are claims Eric's enthusiastic promotion of modern art is sincere but that is difficult to believe since his reasoning in his book is so impoverished. Scientists sometimes clamor to be a part of the glamor and wealth associated with the art world at the expense of forwarding the ideals of critical thinking and the thoughtful dissemination of knowledge. I expect better from a Nobel Prize winner. Marketing fibs are a part of almost any human endeavor but can be tolerable as a means to pique interest that is eventually followed by genuine insight. I don't think Eric achieved that in this book, but I suppose it doesn't necessarily reflect badly upon him as it is unlikely he actually did the writing. Celebrities like Eric don't write books, they sell them.