Theranos is almost toast. Its immolation will be about as spectacular as many informed scientists were hoping. 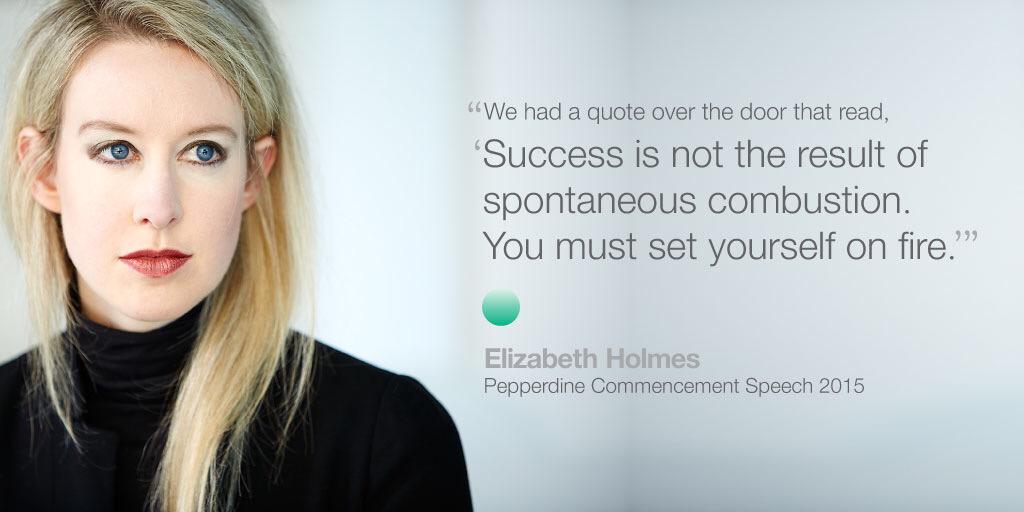 Our feeds were covered in adulatory stories about the "World's Youngest Self Made Billionaire" ushering in a new era in healthcare. We sat around scratching our heads wondering how any of of this could be happening, and there doesn't seem to be any arseno-DNA involved!

She was a bold undergrad dropout that boasted achievements which generally require at least a modicum of servitude in graduate school. With the support of successful professors at Stanford, a celebrity board and a fawning group of journalists, it was clear those who would wonder about the legitimacy of Theranos must be crazy. Who would you be to question Henry Kissinger? Ms. Holmes was clearly brilliant and she was going to save lives with her superpowers and vision. Like many such narratives, journalists seemed to be consumed with what our protagonist wears and eats for breakfast instead of the very premise of the story. It's an old trick popular media likes to play on readers when covering women involved in science, there are times when you can almost see the smirk on the face of the reporter asking the questions. Any proper article about a woman must be sure to ask about her kapoggi apron, the brand of handbags she keeps in her closet and her current marital status (not worth linking to).

Even some of the most cynical amongst us were guessing Theranos' obvious shadiness fell under the same sort of marketing veil that enables other companies who produce useless, or even harmful, products to amass luster and large profits (look at 23andme). She'll be fine, we thought.

But the stories questioning the validity of the company's tests kept trickling out. Disgruntled employees started publicly complaining about Theranos' procedures and products. Then there was the suicide of Ian Gibbons who was working at Theranos. We then saw warnings from regulatory agencies. Still, I was hesitant to call out the fraud (though it was on the tip of many tongues). They were in Walgreens afterall, wouldn't they vet this stuff? Well, Walgreens sells homeopathy too.

The credibility of Ms. Holmes seems to have coincidentally followed the same trajectory as the progressively less flattering photos of her in articles. It is clear now this is the giant fraud we thought it was and just look at the effort that was put into hiding it. There really is no difference between Ms. Holmes and people like quackademic doctors or politicians that support "Complementary and Alternative Medicine". They all happily trade in patients' safety and lives for their own glory. Theranos is certainly the most distilled spirit of Silicon Valley Snake Oil you can find today. Funny how it tastes a little like Kool-Aid.